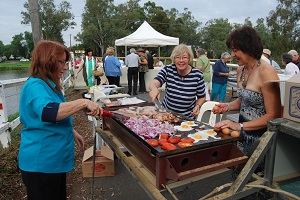 “The level of support for the forthcoming festival caught me by surprise,” guest facilitator Steve Baldwin admitted. “It was humbling to see so many community representatives from Forbes, Parkes, even Orange at the Brunch On The Bridge workshop.”

“When you combine this support with the idyllic venue by the lagoon I would say the Kalari-Lachlan River Arts Festival has a strong future,” he said.

Steve Baldwin drew attention in his introductory speech to the role the arts and arts festivals can have in revitalising rural communities and enriching the lives of country people. He cited a recent University of Wollongong report, Reinventing Rural Places: the extent and impact of festivals in rural and regional Australia,[1] which found that festivals contribute to the cultural, social and economic wellbeing of country towns and villages in complex ways which cannot be assessed in purely financial terms.

Deputy-Mayor of Forbes, Councillor Graham Falconer, urged the multitude on the bridge to ‘think outside the box’ and come up with radical new ways of celebrating country creativity which engage people of all ages and all backgrounds, especially young people. 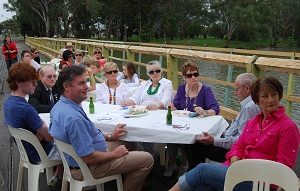 Activities proposed at the Brunch On The Bridge ranged from Dragon Boat races on the lagoon to a ‘Speigel Tent’ for live performances and short films by country students, as well as exhibitions and interactive demonstrations of painting, spinning and weaving, hairdressing, cooking and digital animation, for example. The Festival Lounge in the Forbes Sports and Recreation Club will host an exhibition by Forbes Arts Society and tastings of Lachlan Valley wines, and the Forbes High School and Red Bend Catholic College will use the Festival to showcase their students’ talents. The main stage and numerous smaller venues will ensure that all musicians, singers, dancers, actors, poets and other performers who wish to participate in the Festival will have opportunities to do so.

The inaugural Kalari-Lachlan River Arts Festival will be held on Buck Bentick Way and in Frogs Hollow beside the Forbes Lagoon on 4 September, 2011, as the opening event for the NSW State Landcare Forum. It will feature the premiere of the Kate Kelly Song Cycle by composer Ross Carey and Forbes-based writer Merrill Findlay, a dramatic Welcome To Country led by Wiradjuri descendants, a Lantern Parade around the lagoon in honour of the Shire’s often forgotten C19th Chinese migrants, and a full day of music, theatre, poetry and dance performances in diverse genres, along with arts and crafts exhibitions, sports events, and stalls and markets along the lagoon foreshore.

The Festival will be directed by Stefo Nantsou, resident director with the Sydney Theatre Company, who will visit Forbes regularly over the next six months to support community performers and weld the program into a creative whole. Musical director Bill Moxey will also work closely with the community choirs performing in the Kate Kelly Song Cycle premiere in the months leading up to the Festival.

Grants and sponsorship totalling some $90,000 have been applied for through The Kate Kelly Project to mount the Festival. The outcomes of these submissions should all be known by May 2011. An innovation community sponsorship scheme will be announced soon to enable families, businesses and philanthropists to support the Festival through tax deductible cash donations.

Musical interludes were performed by The Lachlan River Trio consisting of violinists Martin Lee and Tristan Reece, and guitarist Doug Richards. This group evolved into a quartet as the morning progressed with the addition of Paul Wiley from Forbes & District Band on his harmonica. 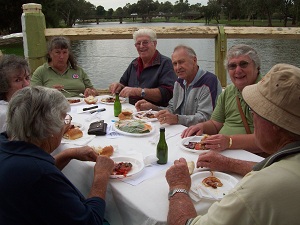 Photographic documentation was by local singer, songwriter and recording artist Charmaine Pout, and Len Reade of Forbes Urban Landcare. The Brunch was videoed by Tracy Sorenson of Squarkin’ Galah Communications, Bathurst, for a television documentary on the Kate Kelly Song Cycle and the River Arts Festival.

The co-hosts and Festival conveners would like to thank Forbes Shire Council, Ron Kenny of Baa, Moo, Oink Butchers,  Lachlan Valley Party Hire, and Trevor Reece Communications for their generous support of the Brunch On The Bridge; Forbes Sport & Recreation Club’s green keeper, Greg Ward, for helping to carry the Club’s table and chairs to and from the bridge; and the Lachlan Catchment Management Authority for the use of their legendary bush barbecue. Plus, of course, the dozens of people who participated in this event.

Tourism and Arts Festival expert Steve Baldwin will facilitate a unique ‘Brunch On the Bridge’ in Forbes from 9.30 am on Saturday morning, 19 March 2011, to ‘plot the program’ for the inaugural Kalari-Lachlan River Arts Festival.

“Tourism and arts festivals have always had a complicated relationship but, if you get it right so that ‘sparks fly’, the marriage can be spectacular,” Mr Baldwin explained this week. “In country towns, such as Forbes, the results can be outstanding in more ways than one: there’s not just the immediate economic impact, but also long term cultural, social and environmental benefits which cannot be measured in dollars and cents,” he said.

Steve Baldwin will tell some of his most inspiring anecdotes about the ‘spectacular marriages’ between arts festivals and tourism he has been involved with himself in regional NSW, as both a festival administrator and a tourism development officer. He will also urge community groups, schools, service clubs, churches, businesses and other organisations and institutions in and around Forbes to add their own performances, exhibitions, events, activities and/or stalls to the Kalari-Lachlan River Arts Festival program to make it as rich, varied and ‘spectacular’ as possible.

Amongst the guests at the Brunch On Bates Bridge on 19 March will be Musical Director William Moxey from Kinross-Wollaroi College in Orange. Mr Moxey will conduct the Festival’s headline act, the premiere of The Kate Kelly Song Cycle by composer Ross Carey, a former music teacher with Mitchell Conservatorium, and Forbes-based writer Merrill Findlay. He sees the Brunch On The Bridge as an excellent opportunity to meet local choristers and musicians and to discuss the Song Cycle rehearsals.

“Despite having participated in numerous premiere performances as either a singer or conductor, I can say that none has had such a direct relevance to the community, to both audience and participants, as the Kate Kelly Song Cycle,” Mr Moxey said. “The combination of community choirs, professional musicians, and the location of the performance so close to where the events recounted in the Song Cycle actually occurred, makes for an exciting concept, and I am honoured to be asked to be its Musical Director.”

The Kalari-Lachlan River Arts Festival will take place on Sunday 4 September, 2011, on the foreshore of Forbes Lagoon just upstream from where Kate Kelly’s body was found in 1898. In the context of this inaugural festival, the ‘ Arts’ will be defined in the broadest possible way to include not only music, dance, theatre, painting, poetry, writing, singing and other traditional arts and crafts endeavours, but also wine-making, cooking, gardening, food and fibre production, landscaping, natural and cultural heritage, horse riding, star gazing, indeed, any activity involving human creativity … which means just about everything!

“We want to ensure that all country folk, no matter what their ages, backgrounds, interests or incomes, will be able to participate in this Festival, and that even those who don’t currently consider themselves to be ‘arty’ will be inspired, enthused and enriched by what they experience,” convener Merrill Findlay commented.

The Brunch on Bates Bridge will be hosted by festival conveners and project partners, including The Kate Kelly Project, Mitchell Conservatorium, Forbes Urban Landcare, Parkes & Districts Landcare, Central West Arts Group, Forbes Arts Society, and Forbes College For Seniors. It will be sponsored by Forbes Shire Council. Organisation and school representatives and others wishing to attend are requested to register with Forbes Shire Council by Thursday 17 March for catering purposes.

The Brunch will be the second community workshop to plan the Kalari-Lachlan River Arts Festival. The first, a very successful community barbecue on 20 December 2010, was facilitated by the Festival’s Creative Director, Stefo Nanstou from Sydney Theatre Company. Mr Nantsou will work with local people in Forbes to weld the program into a creative whole and to support them in developing and refining their festival performances and activities. He is expected to visit Forbes again in April. [Read Stefo’s report on his 2010 visit to Forbes >> ]

The Kalari-Lachlan River Arts Festival will be the opening event for the NSW State Landcare and Catchment Management Forum to be hosted by Parkes & Districts Landcare Group, and will fortuitously also coincide with the 150th anniversary of the town of Forbes.

Local artists, musicians, dancers, rappers, poets, craftsworkers, gardeners, cooks, and fashionistas will sit down to  Brunch on the Bridge in Forbes, on Saturday 19 March 2011, from 9.30 am, to plot the program for the inaugural Kalari-Lachlan River Arts Festival.

This community workshop on the historic Bates Bridge follows the successful community consultation and barbecue at the Forbes Sports and Recreation Club hosted a few days before Christmas 2010 by The Kate Kelly Project and project partners, and facilitated by festival director, Stefo Nantsou. Creative ideas soared at this workshop, as some 30 representatives of community groups, non-government organisations and service providers enthusiastically discussed their participation in the inaugural Kalari-Lachlan River Arts Festival tobe  held beside the Forbes Lagoon on Sunday 4 September 2011.

“The town of Forbes has an excellent natural geography and town plan to host a community arts festival,” Festival Director Stefo Nantsou said after his Christmas visit. He nominated Buck Bentick Way, a bicycle and walking path along the lagoon foreshore, and Frogs Hollow, a shady patch behind the Forbes Sports and Recreation Club, as the ideal locations for the inaugural Kalari-Lachlan River Arts Festival.

“This setting would not only provide a great location for performances and presentations, including a lantern parade, for example, but would also give the many stallholders, service providers and sponsors a great location to sell their food and wares, promote their industries and advertise products in a safe, comfortable and extremely beautiful location,” he commented.

“Fundamental things like power, lighting, staging, public toilets, parking, all seem to be accessible at or near this location, and it would be simple to make them available with the minimum of fuss.”

“A range of musical performances, theatre, art and craft exhibitions, lantern spectacles, historical recreations, an epic Welcome-to-Country, and an exciting blend of Indigenous, Anglo-Celtic, Chinese and other multi-cultural arts all seem more than possible for the inaugural Kalari-Lachlan Rivers Arts Festival.”

Participants in the Brunch On The Bridge workshop on Saturday 19 March will discuss what their groups would like to do for the festival and add their performances, exhibitions, activities and stalls to the program. Director Stefo Nantsou will visit Forbes again when the program is confirmed and will work with participating groups to develop their events and activities in the months leading up to the festival.

All schools, community groups, societies, clubs, churches, associations, non-government agencies, service providers and businesses are invited to send a representative to the Brunch On The Bridge to help plot the program for this very inclusive ‘community celebration of country creativity’. Anyone of any age and any background who can paint, dance, rap, tell stories, sing, sew, sell, ride, build, cook, garden, face-paint, make paper lanterns, or help in other practical ways is invited to contribute their ideas and skills to ensure the Festival’s success.

The Kalari-Lachlan River Arts Festival will be auspiced by Forbes Shire Council and managed by a representative community committee. It will also be the opening event for the 2011 NSW State Landcare and Catchment Management Forum which will take place in Parkes the following week. Feature events will include the premiere of the Kate Kelly Song Cycle by composer Ross Carey and Forbes-based writer Merrill Findlay.

The Brunch On The Bridge to plot the festival program will be sponsored by Forbes Shire Council and hosted by The Kate Kelly Project, Lachlan Campus of Mitchell Conservatorium, Central West Arts Group, Forbes Arts Society, Forbes College For Seniors Choir, Parkes and Districts Landcare Group and other project partners. All representatives wishing to attend the Brunch On The Bridge are asked to RSVP to Forbes Shire Council’s front desk on 02 6850 2300 by Wednesday 16 March for catering purposes.