Kate Kelly, the sister of bushranger Ned, is a folk hero, an icon, a legend in Australia. She was born in Victoria in 1863, and, by 1880, the year Ned was captured at Glenrowan, was a household name, a teenage celebrity as famous (or infamous) as the celebrities we read about it the populist press today. People queued to meet her and to watch her ride. They bought postcards of her in her mourning outfit, a fashionable black silk riding habit. Everyone, it seems, had a story to tell about Kate Kelly. 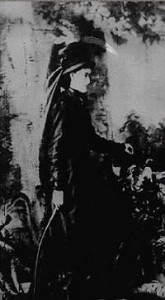 Kate Kelly in her black silk riding habit, probably taken in Melbourne in 1880.

And then she disappeared. She fled her fame, her family, her friends, the north-eastern Victorian hill country she had grown up in. She changed her name several times, and re-emerged, in the mid-1880s, on the flat inland plains of New South Wales between the towns of Forbes and Condobolin, where she found a job as a domestic servant at Cadow, a large pastoral station on the Lachlan River. [See Themes linking Kate’s time with our own.]

One or two years later Kate Kelly moved into Forbes and worked as a home-help for several well respected business families—but she always kept her past to herself. She made friends, went out with a couple of local lads, found one who, like her, loved horses, got pregnant, married him, had more babies, lost at least three … and then she disappeared again. She allegedly told a neighbour, Susan Hurley, that “she wanted to go away for a couple of days to get straight” and asked her to look after her four surviving children, including her newborn baby. More than a week later her body was found in the lagoon. It had been in the water for many days. The coroner concluded that she “was found drowned … but there was no evidence to show how deceased got into the water.”

There is little documentary evidence about Kate Kelly’s life and death in Forbes, yet the folklore about her remains tantalisingly rich and alive. Everyone, it seems, has a story to tell about our Kate or, if not about Kate  herself, then about her husband William Foster, or Bricky, as he was also known. Bricky outlived his wife by more than forty years, and is remembered by old timers as a man who could never avoid a fight. Circumstantial evidence confirms the hearsay: that Kate endured years of violent abuse in her marriage. She almost certainly also suffered from conditions doctors would now diagnose as anxiety, depression (probably including peri-natal depression), post-traumatic stress and substance abuse. Neither Kate, nor the community she lived in, would have been able to recognise or appropriately treat these illnesses, however.

Kate Kelly’s time and our own

See Themes linking Kate Kelly’s time with our own >>

Kate Kelly’s story is eerily current: a young mum in a small country town; an unhappy, even abusive marriage; three kids between the ages of ten and four and a new baby who won’t sleep at night; a husband who’s working way out of town; and her own family too far away to help so she’s trying to cope alone …. This was an all too familiar scenario in the 1890s and, for many families, it remains so today

All of us, both women and men, can identify with Kate Kelly’s story in some way: her love of horses and other animals; the sense of powerlessness she must have felt when conditions beyond her control overwhelmed her; the fear, loneliness, despair she must have so often experienced; and Bricky’s feelings of guilt, loss and remorse perhaps, after her death. Kate’s story still resonates deeply in the bush.

As well as resonances between Kate’s personal life and our own lives today, there are parallels between the broader challenges people faced in the late nineteenth century and those we have been facing in the bush in recent decades. The late 1880s and ‘90s were years of great change in rural Australia: good years followed by a long drought, financial crash, high debt levels, fluctuating commodity prices; the break-up of the large pastoral stations; closer settlement completing the dispossession of indigenous peoples; broadacre ring-barking and land clearance; the extension of the rail system; the spread of cereal cropping and irrigation; land degradation and dust storms; poverty, unemployment, insecurity; debates about Federation and national identity; the rise of settler nationalism; mass migration and a very mobile labour force; the eight hour day; shearers’ strikes, industrial conflict, the emergence of the Labor Party; campaigns for women’s rights and universal suffrage; new ‘boat people’ unsettling the descendants of earlier migrants; the exclusion of ethnic Chinese and other ‘non-whites’ … Such resonances and dissonances make The Kate Kelly Song Cycle uncannily current, topical and thought provoking. The music and lyrics evoke the past, but are very much about the present and our possible futures in rural Australia.

Even though Kate Kelly’s life finished tragically, her Song Cycle ends in a way that is uplifting, hopeful and inspiring. The last song belongs to her husband, Bricky Foster, who lived long enough to gain a little wisdom and self-knowledge perhaps. It is called Bricky’s Sorry Song and is his epiphany. An aria about reconciling all that needs to be reconciled: he and Kate, men and women, indigenous and non-indigenous, majorities and minorities, people and the land, water users and our rivers, we humans and the rest of nature …

Page created 9 March 2015. Content moved from elsewhere on this site.