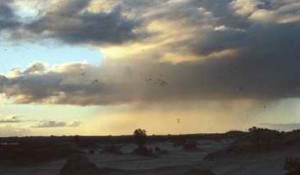 The sun reaches across the darkness of space to our ancient dune ... Lake Mungo, 1990. Photo by Merrill Findlay.

The sun reaches across the darkness of space to our ancient dune, illumes it grain by grain in golden light. Our breath hangs condensed in this Mungo dawn: three women, my two friends and me, and the ghost of a fourth who lived, died and was buried here perhaps thirty thousand years ago. She too watched this same scatter of sunlight, this same early morning alchemy. We read her life but darkly from the only text we have: this now semi-arid crescent dune which was once the eastern rim of a great freshwater lake.

Mungo Lady, as archaeologists renamed her, was born-again just twenty years ago when geomorphologist Jim Bowler noticed her cremated, carbonate-encrusted bones eroding from what had been the dune core. At that time white Australians still believed human beings had occupied Australia for less than 20,000 years: Mungo Lady, a gracile and modern young woman, forced us to reconstruct our academic myths about the peopling of this continent and the ancient migration patterns of our species.

We can’t put flesh to her bones nor words to her lips. We can’t see the world as she saw it, nor even guess what metaphors she used to explain it. But Mungo Lady whispers to us yet from this Pleistocene dune that is now known as the Walls of China. Signs of her passing are scattered across this landscape like the yarrow of the I Ching as we break the silence of the millennia with speculation about who she was, what she ate, how she lived, whom she lived with, and what this great once-brimming inland lake meant to her and to her people. Archaeologists can interpret much from the stone tools and refuse her people left behind, from the way her clan ritually cremated her and buried her remains, and from even the most tenuous hints laid down by time and preserved by happenstance in the earth beneath us.

The story so far is that this lady lived a soft life, a life of high culture, of plenty. She camped seasonally with her clan on a sandy beach by this lake which was filled then with shell fish, golden perch, yabbies and murray cod, and surrounded by temperate woodlands rich in all the resources necessary to sustain a small hunter/gather population in affluence and comfort. 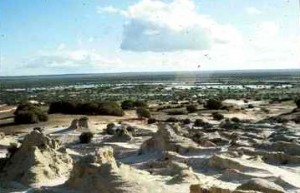 The lake bed from the eroded lunette after rain. Photo by Merrill Findlay, 1990.

Now, thirty thousand years of climate change later, saltbush has colonised the lake floor. By the fossil shore, just a few stunted bellahs. Beyond the eroded lunette, mallee as far as the eye can see. Water has not flowed into Lake Mungo for five hundred generations.

The sun soars towards noon as we sit on this dune and watch. Earth pirouettes, dances her eternal orbit. The day passes. The millennia. Each planetary oscillation, each tilt and wobble, alters our energy budget. These cosmic cycles are etched into the very ground we tread. Each stratum of this dune speaks of climate change.

At the base of the Walls of China, a red wind-blown deposit describes the filling of the lake 50,000 years ago after a long Dry. It tells of water pumped from the oceans by the sun, falling as rain in the eastern highlands, draining into the Lachlan River and Willandra Creek to keep Mungo full for 14,000 years. Another tilt, another stumble in earth’s cosmic pas de deux, and Mungo’s water budget shifted to deficit once more. The lake dried. Pale clay from the lake floor blew onto the dune to testify.

About 32,000 years ago, earth quivered again in her eternal spin. Again the climate changed. More rain fell. Mungo was replenished and remained full for another 7,000 years. These were the lake’s Halcyon days; Mungo Lady’s days of affluence and plenty on a sandy shore. But then began the slide into the last great Ice Age. Another cosmic tantrum, another shift in earth’s absorption of solar radiation, another global drop in mean temperature. Ice sheets kilometers thick crept over northern Europe and Canada. In the south, packs of ice reached to within a few hundred ks of Tasmania. Glaciers formed. The oceans cooled. Atmospheric temperature gradients constricted. Pressure systems intensified. Wind patterns changed. Sea levels dropped. You could walk from Hobart to Port Moresby.

By 16,500 years ago, Lake Mungo was dry. The surrounding landscape, once lush, had become a desert wrapped in clouds of swirling red Parna dust. Hot windy summers, cold frosty winters, reduced growing seasons, high evaporation, little precipitation. Willandra Creek no longer flowed. The lake bed died slowly. A wreath of salt from the water table rose to the muddy surface to flower as white crystals. As the blooms released their water molecules to the air, they collapsed into fine powder and prepared the clay and sand of the lake bed to be scraped and hurled against the flanks of the dunes by the glacial south-westerlies. That clay and sand remains as an eroding grey blanket; a lesson to us all about salinity, land degradation, climate change. 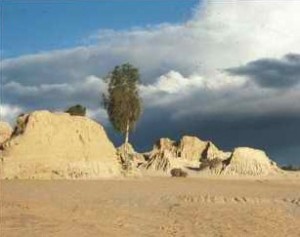 Fire and the silcrete chip quarried from the lake shore were the basic tools Mungo Lady’s people used to manipulate the environment. This technology was not benign, but in the hands of a small population moving seasonally across the landscape, its impact was sustainable. As the climate changed, so did the culture. People adapted. They developed new technologies to exploit new resources and survived. The last two hundred years have been their greatest challenge.

For all of us, for the planet itself, these last two centuries have been the deepest frown across the face of the millennia. In this brief time my tribe has become a life threatening agent of global change. Our fires have burned too brightly. Our technology has scarred too deeply. Our culture has alienated itself from the very source of its nourishment.

We have not, however, lost completely the wisdom we inherited. Daily we construct new, more appropriate visions of our future. Mungo Lady’s silcrete chip is now a memory of times past. The technologies that displaced it — the coal and oil fired furnaces, the internal combustion engines, the nuclear weapons — will themselves become relics, along with the old concepts they were part of. And in our post-industrial silicon chip, perhaps we have a technology with hope. Only the millennia will tell. The story of our future, like that of our past, will be etched into the earth we tread. 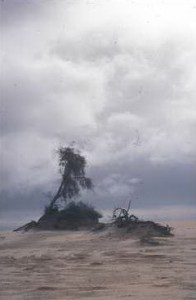 We perch tenuously together on this dune at the end of what my people naively call the twentieth century. Through whatever filters we glimpse the view – the laws of thermodynamics, systems theory, cybernetics, Chaos, deep ecology, Gaia – we are no longer at the apex of creation where our old myths once placed us: we’re just part of the whole. The past, the present and the future camp here beside us.

Our planet, with our sun, continues its tipsy dance through the universe: each tilt, each flare, each flutter of a butterfly wing, each blink of a star we feel, though we may not perceive the effect directly. These events are beyond our control: all we can do is adapt to their consequences. Not so the impact of our way of life, our culture, on our biosphere. That we can change, and must, lest the long term adaptations we will have to make are unmakable.

So – we sit here, you and I, and stare the sun in the eye. Dark violet storm clouds hug the distance: the sun catches their underbellies, showers them with gold, deep rose. A lone peewit flies across the glow. A plover calls her mate. Behind us the sky turns Chinese porcelain as we wait for Venus and sip our wine. To the future. To culture change. To Mungo Lady. To us.

© This material is subject to copyright and any unauthorised use, copying or mirroring is prohibited by law.