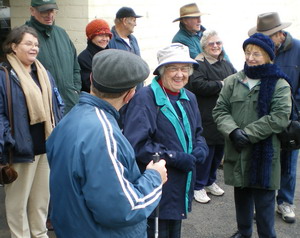 Locals gather at the corner of Browne and Sherriff Streets for the inaugural Kate Kelly Walk, on a freezing Saturday afternoon, 21 June, 2008.

More than twenty shivering locals from Forbes, Parkes, Warroo and Bedgerebong braved the cold and damp on Saturday to explore Forbes’s links with Kate Kelly, the sister of Ned, Australia’s most celebrated bushranger.

The inaugural Kate Kelly Walk, hosted by local writer Merrill Findlay, began at the corner of Sherriff and Browne Streets where Kate may have lived before she was reported missing on 6 October 1898. The tour then proceeded down Browne Street towards Chinaman’s Bridge near where her body was found eight days later.

“The only documentary evidence we have of where Kate Kelly, or Mrs William Foster as she was then known, lived in 1898 comes from a report on the inquiry into her death published in the Forbes and Parkes Gazette the week after her body was recovered from the Forbes Lagoon,” Ms Findlay explained. “Kate’s neighbour, Susan Hurley, who reported her missing, gave her own address as the corner of Sherriff and Browne Streets and stated that Mrs Foster was ‘lately residing at the opposite corner’. We can’t be sure how long Kate had lived at this address, but we do know that she was coping there alone with three small children and a new baby, because her husband, William ‘Bricky’ Foster, had been living for the past five months some fifty kilometres away at Burrawang Station where he worked as a horse tailer.

We also know, from another newspaper report, that in May 1898, five months before his wife’s disappearance, a William Foster had pleaded guilty in a Forbes police court to abusing his wife in an incident which may have involved physical violence. And, according to evidence that Bricky himself presented at the inquest, he visited Kate just two nights before she was reported missing, an overnight stopover which may have had some bearing on his wife’s disappearance the following day,” Ms Findlay suggested.

The walking tour paused at Lachlan Street where Kate Kelly lived and worked before her marriage in 1888, and continued on to the Rankin Street corner, the site of Mrs Ryan’s Carlton Hotel, where her body was taken after it was recovered from the lagoon. Ms Findlay then guided walkers to the site of the Foster family residence at No. 1 Browne Street where McFeeters’ wool store now stands, and recounted some of her favourite stories about the Foster brothers and their neighbours, including grocer Quong Lee and the Mathias family.

Many of the walkers also had their own Kate Kelly stories to share: Shane Wade, for example, told a family anecdote about one of his forebears, ‘Grandmother Strickland’, who saw Kate walking towards the lagoon and offered her a drink – which Kate politely refused.

The final stop on the inaugural Kate Kelly Walk was to be Chinaman’s Bridge on the Bedgerebong Road overlooking the site of Ah Toy’s vegetable garden near where Kate’s body was found, but the threat of rain forced a change of plans. Ms Findlay now looks forward to another opportunity to share her research and talk about the circumstances surrounding Kate Kelly’s death.

The walking tour was conducted as part of Kate Kelly Project to develop a community music-theatre production which will be performed on and around the Forbes Lagoon in several years time. The project’s research phase has been partly funded by a small grant from the Royal Australian Historical Society through the Forbes Historical Society.