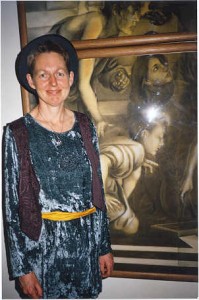 Megaera with her School of Women, at a Republic of Women event during the 1999 Melbourne Writers Festival, at the Hotel Y. Photo by Merrill Findlay, September 1999.

The cover of Republic of Women (UQP 1999), the critically acclaimed novel by Australian writer Merrill Findlay, was designed by Kate Barry for University of Queensland Press, and features a detail of School of Women by the Australian artist Megaera.

Megaera’s image, in ink and charcoal, was completed in 1992 while she was a mature-age student at Ballarat University. It is based on a section of Raphael’s School of Athens, which depicts male philosophers of the ancient Mediterranean world, including Plato and Socrates who are key characters in Merrill Findlay’s Republic.

Raphael used his contemporaries, including Leonardo da Vinci and Michelangelo, as his models. Megaera used her own contemporaries, the young women in her drawing class, as her models. Her self-portrait can be seen at the bottom left of the image.

By retaining the confident and vigorous postures of the male originals, Megaera achieved an image of young women taking themselves and their creative pursuits seriously.