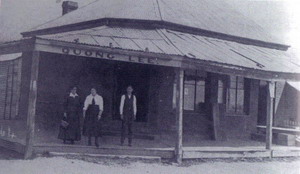 Forbes, NSW, 2009.
One of this small country town’s last material links with its Chinese heritage, Quong Lee’s Grocery Store at 161 Rankin Street, may soon be demolished to make way for twenty extra spaces in a shopping mall car park.

Update August 2015: The developer who wanted to demolish this building has gone into liquidation, the development application has expired, and the historic building has been purchased by its former co-owner. So Quong Lee’s Store/Beryl & Bert’s Music Store is safe, at least for the time being!

Forbes Shire Council authorised the destruction of Quong Lee’s (also known as Mathias’s, and Beryl & Bert’s Music Store) when it approved a development application for a shopping mall and parking lot from the building’s new owners, AusPacific Property Group, in late 2007. Council made this decision against all its expert advice, including that of its own heritage advisor, David Scobie, and against the advice of its own planning department.

The proposed mall site also includes No. 1 Browne Street where Kate Kelly’s in-laws, the Foster family, lived for more than eighty years, and where Kate Kelly herself may have lived briefly in the late 1880s after her marriage to William ‘Bricky’ Foster. For the Fosters, and for Kate herself, Quong Lee’s would have been their corner store, a link which will be highlighted in the Kate Kelly Song Cycle production.

The Forbes Advocate published an article on the proposed mall soon after the first development application was submitted to Council in 2007 (Retail Plans Revealed, 20 December 2007), but unfortunately I didn’t see it at the time so didn’t lodge an objection. Council received other objections, however, but none of these referred to the building’s heritage significance – even though a number of locals were, like me, aware of its rich history. A photograph of Mr Quong Lee on the veranda of his shop was published in a 1997 local history book by the Forbes History Book Committee, for example, and the building’s heritage was referred to in oral history recordings made by Forbes Shire’s Heritage Advisory Committee, notably in an interview with the late Dave Mathias, a much loved blind folk musician, whose family purchased the property in the early C20th.

Quong Lee’s Store was also recognised as worthy of preservation in a 2006 State Government’s Heritage Office report, but was not listed on the State heritage register, and nor did it receive any other protection under Commonwealth or State heritage legislation. The building wasn’t even recognised as a significant site under local government planning codes. Indeed, the developers themselves later claimed that Councillors had told them that there would be “no problem” with heritage on the site, and that, had they known about the heritage values of 161 Rankin Street, they would not have proceeded with the purchase.

So what could be done to save this building? In an attempt to seek broader support I made a heart-felt appeal to the annual conference of the Royal Australian Historical Society held in Forbes in October 2008. Conference participants responded with a unanimous resolution condemning Council’s decision and urging the developers to follow ‘best practice’ by integrating the historic building into their proposed shopping mall. 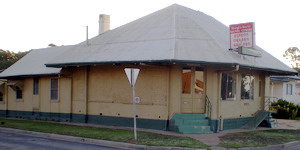 Quong Lee’s Store (aka Beryl and Bert’s Music Store) as it stood in December 2008. Photo by Merrill Findlay for the Kate Kelly Project.

In December 2008, some twelve months after the first development application was lodged, AusPacific Property Group presented a revised application to Council “for the demolition of existing buildings and the construction of a shopping centre comprising a supermarket, specialty shops and carpark”. This new DA  gave locals, and anyone else concerned about regional Australia’s cultural heritage, a second opportunity to object to the demolition of Quong Lee’s, and to recommend alternatives for the building’s future. And by this time all ‘stakeholders’ knew about the site’s heritage significance.

Throughout the summer of 2008/09 a small group of locals campaigned vigorously against the proposed demolition. We sent out press releases, did media interviews, set up photo opportunities, lodged objections to the development application and, through the Kate Kelly Project, presented a proposal to Council for an alternative to demoliton (January 2009). As a result of our campaign, Council received nearly two dozen new objections from individuals and heritage organisations from afar afield as Perth, Western Australia. But, according to Councillor Phyllis Miller, who inherited this debacle when she became Mayor, nothing could be done to ‘undo’ Council’s earlier approval of the DA to demolish of Quong Lee’s.

So we then appealed directly to Peter Haxell, one of AusPacific Property Group’s directors, and asked him to restore the historic building and integrate it into his proposed mall development as a heritage feature. We also encouraged anyone else interested in Australian Chinese heritage to contact the AusPacific directors and ask them to ‘do the right thing’, and urged Council to commission a professional photographer to fully document the site under the direction of a heritage adviser, and to fund a full archaeological survey of the block … just in case we failed to stop the bulldozers.

Trying to save Quong Lee’s has put the Kate Kelly Project in a delicate situation because Forbes Shire Council is a highly valued project partner. But to not protest against the threatened demolition of this historic building, and to not offer alternatives to its destruction, would be even more compromising.

Hopefully the Kate Kelly Project’s proposal to restore Quong Lee’s Store and transform it into a valuable community asset will inspire Councillors and developers alike to think more creatively about preserving at least part of the building for present and future generations … because a restored Quong Lee’s will be far more valuable, in the long term, than 20 extra spaces in a shopping mall car park!

More on the threatened demolition

On the corner of a little street in a small country town stands a building, paint fading, windows boarded up, looking very lonely. Almost 200 years ago it was a place of bustling business to the rural Chinese population of Forbes, in the Central West.

This last ‘physical memory’ of the shire’s remarkable Chinese heritage in the town’s built environment, will soon be flattened to make way for a new car park. Read more and listen to the audios>>

WHAT CAN YOU DO TO HELP?

CONTACT THE DEVELOPERS, AusPacific Property Group, and ask directors Peter Haxell, Richie Steinert and Paul Allinson, to respect and embrace rural Australia’s Chinese heritage by saving Quong Lee’s Store and integrating it into their shopping centre. Please also offer them an exciting an economically viable alternative to demolishing the building.

YOU CAN ALSO CONTACT Forbes Shire Council and urge Councillors to think a little more proactively about saving Quong Lee’s and to do whatever is necessary to protect it, and the many other historic buildings in Forbes which remain unprotected.

YOU MIGHT ALSO LIKE TO CONTACT the NSW Heritage Office, the Heritage Council and the NSW Minister for Planning urging them to issue an interim heritage order to protect Quong Lee’s, an action which would give Council and the developers time to think again about the building’s future and to find ways of funding its restoration.