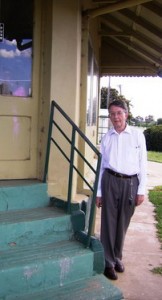 President of the RAHS, Professor Ian Jack, inspects the historic Quong Lee building on 19 October 2008. Photo courtesy of the RAHS.

The following resolution was unanimously carried :

The Conference of the Royal Australian Historical Society recognizes the high historical significance of the store built and operated by Quong Lee at 161 Rankin Street, Forbes, as the principal item of Chinese heritage in the district, and the Conference urges the Mayor and Council of Forbes Shire to reconsider the decision to demolish Quong Lee’s store.

This store is recognised as a site of heritage significance in the report Chinese Heritage Through the Central West and Western NSW presented to the Heritage Office of NSW by Barbara Hickson and Heather Nicholls in 2006. It is item 55, State Heritage Inventory number 4677055.

In the statement of significance in the Hickson and Nicholls report, it is concluded that : This former Quong Lee grocery store is an important reminder of a number of Chinese commercial interests that once existed in Forbes. The Chinese community appear to have been better established commercially in Forbes than in other towns, partly because of a very successful market gardening base.

The report draws attention to the fact that the other Chinese stores in Forbes, as illustrated in [the local history book] Forbes, NSW, Australia, pp.292 and 308, no longer exist. In the same book, a photograph of Quong Lee himself on the verandah of his store at 161 Rankin Street is shown on p.300.

The conservation of a historical building is not incompatible with modern development. Excellent examples include:

1. the incorporation of a significant building in Tenterfield into a new supermarket complex

2. the continued use of several heritage cottages adjacent to the shopping development in Richmond, NSW, and

3. the incorporation of the striking archaeological remains of Fitzroy Ironworks into the carpark of Woolworth’s development at Mittagong.