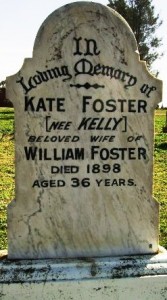 If only we could find some more evidence about how, when, where and why Kate Kelly died. An inquest report would do. But alas, the NSW Public Records Office advises that no records from investigations into the death of Catherine Foster, nee Kelly, in October 1898, have survived: indeed, the Public Records Office apparently has no inquest papers for the entire year 1898-99.[1]

The only documentary evidence we have concerning her death, therefore, is a report on the brief ‘magisterial inquiry’ conducted on the day after her body was recovered from the Forbes Lagoon, as published on page 2 of the Forbes and Parkes Gazette, 18 October, 1898. Unfortunately there is no way to verify or test this report, or to clarify its many ambiguities, or to fill the many gaps in the evidence presented to the coroner, as reported by the unnamed journalist.

A full transcript of the Forbes & Parkes Gazette report follows.

For about a week it had been known that Mrs Wm. Foster was missing from her home in town, but there was no reason to suspect anything more than that she had gone away, hence some little excitement was caused in town about midday on Friday when it became known that her body had been found floating in the lagoon at the back of the Chinaman’s Garden opposite the new racecourse. The police brought the body to Mrs Ryans Carlton Hotel, where it was examined by the Government Medical Officer, Dr. McDonnell, and from which it was interred on the following day.

A magisterial inquiry was held the Saturday afternoon by the Coroner (C.P. Sowter, Esq.,) when the following evidence was taken:-

Edward Patrick McDonnell, Government Medical Officer, Forbes, deposed: Yesterday afternoon I made an examination of the body of deceased; owing to the advanced stage of decomposition it was impossible to form any definite opinion as to the cause of death, or to recognise the presence of marks of violence; if the body was in the water seven or eight days it would present the appearance it did; I should think the body by its appearance had been laying in the water from four to eight days.

By the Police—I may have treated deceased during life but not for a number of years, and do not recollect particulars.

By Mr Foster—I do not particularly remember treating her some years ago for mental derangement.

By the Police—There was no suspicion if foul play from the disposition of the clothes on deceased’s body.

Susan Hurley, wife of Edward Hurley, Forbes, deposed: I reside with my husband at the corner of Sheriff and Browne streets; I saw the body of deceased yesterday at the Carlton Hotel; I identified it as that of Mrs William Foster, lately residing at the opposite corner; I last saw her alive on Wednesday, 5th October, instant, about 2.30 p.m.; she was then sitting in her own house; she was slightly under the influence of drink and asked me to write a note for her; she asked me to take her baby, an infant five weeks old; I then came home and did not see her afterwards; she did not threaten to do anything, but said she did not like the baby because it was on the bottle, and asked me to take it and that Mr Foster would pay for its keep, as she wanted to go away for a couple of days to get straight; I never heard her threaten to commit suicide; I have seen her under the influence of drink; and then only for the past month, since the baby was born; on Thursday night I reported that she was missing from her home to the police on the Thursday night 6th, at 10 p.m. I reported she had left her home, and infant, with no one to care for it; she has not returned since, and I am caring for the infant and other children.

William Henry Foster, Forbes, deposed: I am a horse tailer at Burrawang at present; I was last at home on Tuesday, 4th October; I came from Burrawang that day; when I arrived home my wife was under the influence of drink; I remonstrated with her and she promised to reform; when I first left home for Burrawang she was in bed recovering from her confinement; seeing the condition she was in I only left 6s on the Wednesday morning before starting for Burrawang. I also bought some things for the children; I left between eight and nine a.m. on Wednesday 5th; I knew no more till communicated with by the Forbes police on Friday evening 7th, that my wife was missing; I came to Forbes in consequence of that information on Saturday evening, 8th instant; finding my wife was not home, I made every search for her, but failed to find any trace of her; I informed the police that I did no apprehend she would destroy herself, and left on Sunday morning for Burrawang; subsequently I received information about 4.15 p.m. yesterday that my wife had been found dead in the lagoon; I arrived in Forbes about 6.5 p.m., and saw Constable Garstang, who gave me particulars of the finding of the body; I then accompanied him to the Carlton Hotel and saw the body, which I identified as that of my wife lately; she has been addicted to drink; I have not been at home for the last five months; I have frequently heard my wife threaten to commit suicide when under the influence of drink, especially since her sister did so.

Senior Constable J.J. Garstang, Forbes, deposed: On Friday morning, 7th instant, I received information that deceased had left her infant, five weeks old, without any person to care for it. I made diligent search to try and ascertain her whereabouts, but failed to find any trace; the infant and other three small children were taken care of by a neighbour; I communicated with her husband, and saw him on Saturday evening; I continued making search to find her whereabouts till yesterday about 12.30 when I was informed that the body was floating in the lagoon; in company with Constable Kennedy I proceeded town [sic] the lagoon down the Condobolin road, and at the rear of Ah Toy’s residence, I there saw the body floating face downwards, about ten feet from the bank against a log; the lower portion of the back was bare, the clothes having fallen over the head; we removed the body from the lagoon and conveyed it to the Carlton Hotel, where it was examined by the Government Medical Officer. I searched the body and found no property in the pockets; the body was fairly clad, but no hat on, and stockings but no boots, deceased was wearing four rings on the left hand, and a brooch in her dress there were no suspicious circumstances or anything to indicate foul play; I was actually the first person to touch the body to bring it out of the water; a Mr Sullivan gave us the information; he saw the body and at once communicated with the police, who were down at the lagoon in about ten minutes; Mr Sullivan was told to attend to-day, but is not present now; he was outside just now.

The following verdict was returned:-

That deceased Catherine Foster was; found drowned in the lagoon on the Condobolin Road, on the 14th instant, but there was no evidence to show how deceased got into the water.

This report from the Forbes & Parkes Gazette, 18 October 1898, was transcribed and posted on-line by Merrill Findlay for the Kate Kelly Project, on 23 November 2008, and reposted on this new site on 3 December 2010.