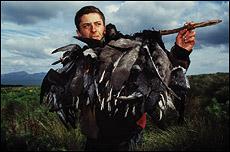 As the days grow shorter in the far-off waters of the North Pacific, hundreds of thousands of hungry, dun-coloured seabirds, millions even, begin their long annual flight south to Big Dog Island from their Arctic feeding grounds to mate, lay their eggs and rear their young, the next generation of short-tailed shearwaters, or mutton birds.

Big Dog itself is an island of extraordinary fecundity. Even the granite boulders scattered around its coast are covered with an iridescent living skin of orange lichen, and every square metre of earth is riddled with mutton bird holes. While the chicks are in the burrows, the very soil seems to throb. In the pre-dawn darkness when the birds are active, the air, too, is alive with rustlings and raspings, loud trumpetings and thumps. But just before dawn, silence again. Slowly the perfect beaches between the boulders become splashes of white across the monochrome. The sky, the water turn pale gold and rose. Cape Barren geese rise from the tussocks and honk, each with a different church-organ tone, and crows circle and caw overhead looking for the chicks that didn’t survive the night. 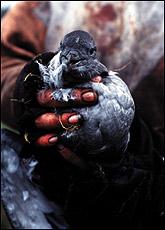 Soon smoke is rising from a chimney and an old iron kettle is singing over an open fire. A torch in the half-light, the rude stutter and whine of a diesel generator, and electric light floods the corrugated iron sheds, kitchen and sleeping quarters of John Wells’ birding lease. Traditionally women have remained in the sheds to process the birds on Big Dog, but this is the end of the season and many of the young men have already left, so it is John’s daughters, 14 year old Peta and 21 year old Kimberley, who accompany their father into the rookery this morning. Already John is singing. ‘A man can be free here,’ he says.

John and his daughters disappear amongst the tussocks. They bend, kneel, and stretch out along the ground to each thrust an arm down a mutton bird hole. Their fingers touch the soft down of a chick, they grab it carefully to avoid being pecked, and pull. With a quick flick of the wrist they break its neck and drop the small still-twitching body onto the earth — then move to the next hole.

At the other end of the island, on the lease Bernice Conde runs, the rookery remains exclusively male territory. Here Rex Burgess and his ‘apprentice’, Nathan Maynard, are at work amongst the tussocks. There is nothing aggressive nor mechanical about their harvest and many burrows remain overlooked, a blessed inefficiency that ensures the mutton birds’ survival on Big Dog.

When the body-count is sufficient the catchers thread the dead chicks onto wooden spits, lift the spits across their shoulders, and return to the sheds as generations of birders have done before them. By evening, hundreds of small, plucked and gutted bodies are waiting neatly on wire racks to be packed and shipped to Flinders Island — and from there to markets in Tasmania and the mainland, including Melbourne’s Victoria market.

For five weeks every Autumn, this scene is repeated on each of the eight leases on the Aboriginal island of Big Dog. At the end of the season the mutton birders leave, and so do the chicks that have survived to fledge. But next year the skies will again darken as hundreds of thousands of birds, millions even, return from their Arctic feeding grounds to nest, and once more, Tasmania’s Aboriginal people will get that ‘itch’. And so the timeless bond between short-tailed shearwaters and the people who harvest them will continue.

To make this trip into Bass Strait, the dangerous body of water between Tasmania and the Australian mainland, Sandy Scheltema and Merrill Findlay chartered The Fand, a 38 foot steel-hulled Colin Archer designed yacht built, owned and skippered by reknowned Greenpeace sailor, Chris Robinson. David Scott was first mate on this voyage.

Chris Robinson is known internationally for his fearless work on Greenpeace’s first yacht, Vega, and later on the Rainbow Warrior in the waters around Muraroa Atoll where the French government tested its nuclear weapons. Indeed, Chris was on the Warrior when French agents blew it up in New Zealand, killing the photographer. More recently he was in the North Atlantic participating in the Brent Spar action. As this is posted, Chris is reportedly sailing one of Greenpeace’s yachts to South America. 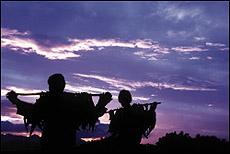 Photographer Sandy Scheltema has sailed with Greenpeace many times, and has worked extensively with other non-governmental organisations around the world on environmental and social justice issues. She is a photojournalist with The Age, Melbourne, and continues her professional work with other agencies. World Vision sponsored a touring exhibition of her international photographs on children of war, poverty and child labour in 1999/2000.