Sheep are part of my cultural heritage. My family has been producing wool and sheep meat in Australia since at least the 1840s, and, in other parts of the world, probably since Neolithic times. This inheritance is a great moral burden for me, given the colonial and post-colonial history of pastoralism in Australia. I’ve been trying to ‘unburden’ myself over the last couple of decades in some of  my non-fiction , but I  need to wrestle with the moral complexities and ambiguities of my heritage, along with my own conflicted emotions about it, in my fiction, too. Hence this novel, which I’ve tentatively called Merino.  [More on my wrestlings >>] 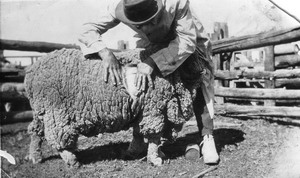 I finished six draft chapters  for the Australian Studies journal, Eucalypt, not long after a sojourn in Spain as a guest writer at the Australian Studies Centre, Departament de Filologia Anglesa i Alemanya, 1st Universitat de Barcelona, Catalonia, to speak at the Changing Geographies: Australia and the millennium conference in 2000, about my first novel, Republic of Women.

Although it was hardly a ‘cool’ thing to do at the time, nor a ‘cool’ subject to investigate, I used my visit to Spain to research Spanish merinos in Estramadura, with the support of the Australian Association of Stud Merino Breeders, and its Spanish equivalent, the Associacion Nacional de Criadores de Ganado Merino. I would like to particularly thank Carol-Ann Malouf in Australia and Florencio Barajas Vazquez in Spain for helping me with this, and, of course, Susan Ballyn, Executive Director of the Australian Studies Centre, and her colleagues, for inviting me to Spain.

As you’ll see from the extract below, however, I researched a little more than sheep while I was in Spain! I visited the city of Zaragoza and Fuendetodos, the home village of Francisco Goya [more], spent hours gazing at Goya’s work in Madrid’s Museo del Prado, and followed Don Quixote in La Mancha, for example. Both Goya and Cervante’s hidalgo make guest appearances in my Merino.

This second novel has now been put on hold indefinitely while I deal with more pressing priorities. These include, most recently,  a ‘narrative meditation’ on Australia’s 2001 ‘Tampa Affair’ (for a creative PhD dissertation), my Kate Kelly Project, the inaugural Kalari-Lachlan River Arts Festival, and, more recently, Sky Stories: 50,000 years of astronomies on the inland plains of New South Wales. [Reasonable-enough ‘excuses’ to delay the  completion of an emotionally fraught literary fiction, don’t you think?]

My very preliminary draft chapters are already in the public domain, yet I still feel very shy about offering them here. Future drafts will be very different, I suspect.

Bo’s in her studio. It’s morning and the long, dull boom of a fog horn is signalling the approach of another ship. A towering hulk nudges the sill of her far window and begins its slow passage across her view, the rusty bow and ‘midship stacked with brightly coloured containers followed by the lazy stern. The vessel fills her nineteenth-century window frames one by one, and slowly disappears, but the traces of its passing, the oily ripples and opalescing bow-waves, linger in the estuary, this City of Melbourne’s port. Read on >>

Please note that the characters in this fiction bear no relationship to people I met in Spain or elsewhere. All characters are entirely fictional and it is presumptuous to assume otherwise. (But writers always say that, don’t they!)

Merinos as Cultural Heritage, written for the Stud Merino Breeders journal, Top Sire, on my return from Spain:

It looked so familiar at first. Ewes grazing contentedly on the early spring grass, snowy lambs cavorting beneath the sheltering trees … but even to me, a bush-born and bred city-based writer… More >>

A ‘non-paper’, Literature as a tourist asset, presented at the 2000 Barcelona conference before I set out for Estramadura to look at sheep:

The first dawn of what we in the ‘West’ now call the Year 2000 began far too early for me, at 3.15 a.m. to be precise, with an adolescent rooster testing his testosterone in the chook yard and the much-too-close nocturnal emissions of a warbling willie wagtail. A pause just long enough for this new day to emerge from darkness into half-light, and then a screeching, screaming helicopter gun ship squadron of sulphur crested cockatoos, and a pair of delinquent kookaburras giggling hysterically at me from the nearest gum tree. More >>

Other fiction by Merrill Findlay >>