For about a week it had been known that Mrs Wm. Foster was missing from her home in town, but there was no reason to suspect anything more than that she had gone away, hence some little excitement was caused in town about midday on Friday when it became known that her body had been found floating in the lagoon at the back of the Chinaman’s Garden opposite the new racecourse. The police brought the body to Mrs Ryans Carlton Hotel, where it was examined by the Government Medical Officer, Dr. McDonnell, and from which it was interred on the following day.
Forbes and Parkes Gazette, October 18, 1898, page 2. More >> 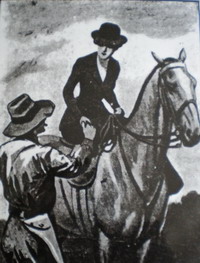 Postcard of Kate Kelly on her horse Pathfinder after winning the Wagga Cup, probably in the early 1880s, with her brother Jim. Courtesy Forbes Historical Society and Mathias Collection.

Catherine Foster, the daughter of Ellen and John ‘Red’ Kelly, was born in Beveridge, Victoria, in 1863. Her father died when she was just three years old. Her mother later acquired a small selection on Eleven Mile Creek near Greta in East Gippsland, and settled there with her seven young children. The family’s life at Greta and the events leading up to her brothers Ned and Dan’s brief careers as bushrangers are now part of Australia’s national mythology, as is Kate and her sister Maggie’s role in the Kelly uprising.

Kate Kelly arrived in the Forbes district on horse back in 1885,[1] in the company of Hugh McDougall, the overseer of Warroo Station, whose family may also have lived near Greta.[2] She was initially employed as a house maid by the Jones family  on neighbouring Cadow Station but, in 1886 or ’87, she moved into town, where she worked for the Luthje, Gunn and Prow families.[3]

Many anecdotes survive in local folklore about Kate’s life and death in Forbes, but few of these anecdotes are supported by verifiable evidence. An interview with an elderly Mrs Rae published in the Forbes Advocate in 1955, for example, offers us a glimpse of the ‘real’ Kate, although we don’t know how reliable a witness Mrs Rae was.  She claimed, however, that Kate was “a nice looking girl, with long dark hair” and “a good servant”.[4] Mrs Rae also remembered that her youthful acquaintance “went under the name of Kate Hennessey”, because she “did not want it known generally that she was a sister of the Kelly boys.” Other contemporaries recalled that Kate used the name ‘Ada’ to hide her identity, and certainly this is the name that appears on her marriage certificate.[5]

According to Mrs Rae, Kate “started keeping company with a young chap named Leonard” when she came to Forbes and, after he “went to Western Australia”, she “started going out with Will Foster … whom we used to call Bricky.” [6] Will Foster may have been running the livery stables on the corner of Court and Rankin Streets at this time, not far from the Prow family residence in Lachlan Street where Kate was working as a home-help.[7] The couple were married in the Anglican Rectory in Bandon Street, Forbes, on 25 November 1888.[8] The first of their six children, Frederick Arthur, was born four months later on 15th March, 1889.[9] Kate may have worked with Bricky at the stables after their marriage and was often seen breaking in young horses on what is now South Circle Park, “sometimes to the ire of her husband”, as locals recall.[10]

Will Foster was the third child of gold prospector Frederick Foster and Mary Foster nee Davis who arrived in Forbes in 1863 during the gold rush era. Will was born in the family home at No. 1 Browne Street on 10 March 1867.[11] He worked as a blacksmith, drover, horse-breaker and itinerant farm and station worker for most of his adult life, and is remembered as a ‘wild fellow’, a man who could be both abusive and physically violent.[12] On 20 May, 1898, for example, five months before Kate’s body was found in the lagoon, he was charged in the Forbes Magistrate’s Court with using abusive language “in his own house to his wife, within the hearing of the public.”[13] Domestic violence was not a criminal offence at this time, and little could be done to help women in abusive marriages, but someone must have been concerned enough on this occasion to ask the police to intervene.

At the time of Kate’s disappearance ‘Bricky’ was working as a horse-tailer on Burrawang Station some fifty kilometres west of Forbes. He had been living on the station since at least the time of his court appearance but had visited his wife on the night before she disappeared and “remonstrated” with her. He later claimed that he had returned to Burrawang the following morning, after leaving Kate six shillings and “some things for the children”. [14]

Kate and her four surviving children, including five week old baby Catherine, were probably living at the corner of Browne and Sherriff Streets at this time. Kate may also have been suffering from post-natal depression; she was almost certainly sleep-deprived and lonely; and she may have been drinking. At about 2.30 on the afternoon of Wednesday 5 October she allegedly asked her neighbour, Susan Hurley, to take care of baby Catherine and to write a note for her – but no records of the contents of this note have survived. Kate then left her house and never returned.

Susan Hurley reported to police that her friend was missing at about 10 pm the following night, Thursday 6 October. Senior Constable Garstang received the report the next morning and immediately began looking for Kate. A week later, on Friday14 October, a Mr Sullivan found a body in the lagoon wedged against a log “about ten feet from the bank” behind Ah Toy’s residence on what is now the Bedgerebong Road. Susan Hurley identified the body as that of her friend and neighbour.

By today’s standards the police investigation and the magisterial inquiry that followed were seriously inadequate. Today the site where the body was found would be declared a crime scene, extensive forensic tests would be conducted, and all the deceased’s relationships, including her marital relationship, would be investigated. William Foster would almost certainly be considered a suspect, or at least a ‘person of interest’. This was not the case in 1898, however. Senior Constable Garstang could only report that there were “no suspicious circumstances or anything to indicate foul play”, and Dr McDonnell could only state that, “owing to the advanced stage of decomposition it was impossible to form any definite opinion as to the cause of death, or to recognise the presence of marks of violence”. The Coroner had little option, therefore, but to return the following verdict: “That deceased Catherine Foster was; found drowned in the lagoon on the Condobolin Road, on the 14th instant, but there was no evidence to show how deceased got into the water.”[15]

Kate Kelly was buried in the Forbes cemetery on Saturday, 15 October 1898. Her brother, Jim Kelly, drove his wagon from Greta in Victoria to collect the three oldest children—ten-year-old Frederick, Gertrude who was eight, and four-year-old Ethel Maud—and took them back to the family selection at Eleven Mile Creek, where his mother Ellen looked after them. Baby Catherine remained in Forbes and died on 15 December 1898.[16]

Son Frederick later became a beekeeper at Myrrhee in Victoria and enlisted in the 17th Battalion of the AIF in World War I. He was killed in France on 15 April, 1917. His name can be found amongst the Commonwealth War Dead at the Villers-Bretonneux memorial.[17] Gertrude married Douglas Cavanagh in 1910 and had two children, John Frederick Arthur (b. 1910) and Ruby Lyah (b. 1911). She died in 1924 and her children were raised by her husband’s mother in Corowa, NSW. Ethel Maude had a daughter, Grace Foster, in 1915, and, in 1916, she married Albert Hibbert. The couple separated after Grace’s death in 1916, and divorced some time later. Ethel Maude died in 1944 in Echuca.[18]

William  Foster kept in contact with his children and visited them on several occasions. He died in Forbes in August 1946 and, like Kate, was buried in the Anglican section of the Forbes cemetery, although a safe distance away from her grave site.[19] In his obituary Bricky is remembered as “one of the oldest natives of the Forbes district”.[20] He was survived by six of his Foster siblings but, tragically, by none of his own children.

[5] Edward Foster, True Story of Kate Kelly,  Forbes Advocate, Letters to the Editor, 21 October 1955;  Kate’s marriage certificate and the death certificates of at least some of her children also identify her as Ada.

———. “Found Drowned [Report on the Magisterial Inquiry into the Death of Kate Kelly].” Forbes and Parkes Gazette,, Tuesday 18 October 1898, 2.

McLean, Liz. Interview with Dave Mathias. Forbes: In the collection of the Forbes Historical Society, 2003.